Pearl Road (Rt. 42), which became known as the Wooster Pike, was originally an Indian trail that extended from Lake Erie south down to the current Wooster, Ohio, location. Prior to the Civil War, Pearl Road was the area’s first Underground Railroad route on which runaway slaves could travel to Cleveland and escape by boat to Canada. In the 1890s, Pearl Road became the first red-bricked highway in the nation.

Our special thanks to local historian Betsy Menzel and the  opens in a new windowMiddleburg Heights Historical Society, who helped provide this information. 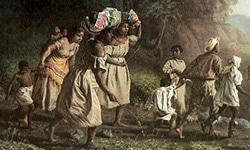