The History of the Police Department

Middleburg Heights was first settled by log cabin pioneers in 1809, only six years after Ohio became a state. We started out as a large, sparsely populated township that also included modern day Berea and Brook Park.

Law enforcement in our community dates back almost 200 years, with humble beginnings.

Before Ohio achieved statehood in 1803, for example, there was only one sheriff for all of eastern Ohio. He was Col. Ebenezer Sproat, who served from 1788 to 1803.

Back then, local police officers were called “Constables.” Middleburg(h) Township’s very first police officer was Constable Efrem Vaughn, who was appointed in 1810 by the State of Ohio to help keep the peace.

Eventually, communities elected their own constables. Our township’s first elected constables were Jared Hickox and Efrem Fowles, who were elected in 1821.

A U.S. marshal enforced federal laws. The first U.S. marshal in the Ohio District was Lewis Cass, who was appointed in 1807 by President Thomas Jefferson.

Our township constables called upon the county sheriff and his deputy for assistance. The first Cuyahoga County sheriff was Smith S. Baldwin, who served from 1810 to 1813. Baldwin worked in a two-story log cabin located on the corner of Ontario and Lakeside avenues in Cleveland. The log cabin housed two jail cells as well as a living room for the sheriff and served as the county courthouse.

Middleburg Heights was a township until 1928, when residents voted 316 to 41 to form the Village of Middleburg(h). The village subsequently had its own village marshal and deputy marshals, who were appointed by the village council to protect the community and enforce the laws. 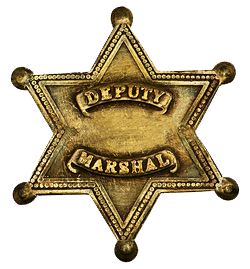