When the former Cuyahoga County Public Library branch is transformed into a new police station, the public will see firsthand the benefits of 21st-century law enforcement, which will include cutting edge tools to help keep the community safe.

Previous plans to construct a new police station on Bagley Road at the Central Park area was in the works for several years.  A decision needed to be reached because the current 40-year-old police station was plagued by structural issues and programmatic deficiencies. There were also significant costs associated with additional needed maintenance repairs.

The results of the feasibility study showed that the former library building could be transformed into a high-tech and welcoming police station at a cost of roughly $5 mil to complete the project, which is half the cost of building a new police station from the ground up.

After detailed review and planning with Larsen Architects, the City’s leadership concluded that it was time to close the crumbling 40-year-old police station and move forward with the adaptive reuse of the former library building.

“The modern station will be a beacon in the City. The new facility, located at Bagley Road and Big Creek Parkway, will be a highly visible, centrally located and easily accessible station that will serve the evolving needs of the community — and that’s the point as we continue to embrace the spirit and positive intention of community policing,” said Middleburg Heights Police Chief Ed Tomba.

Much of the original library structure will remain intact, however the new glass Memorial Hall, known as The Lantern, will shine at the front corner of the police station for both police and public gatherings, as seen in the rendering above.

Memorial Hall will allow the department to interact with the community on a personal level, but the glassed-in space will be run by the city and will function independently from the police station.  A secure entrance will separate Memorial Hall from the rest of the new station.

“The adaptive reuse of a structurally sound building, with modest exterior changes, will meet both the functional program and aspirational goals of the police department,” Mayor Matthew Castelli said. “I’m excited about all the positives this project will bring to our community.”

City officials are now collecting construction bids for the new station which is expected to open in 2022.

An overview of features, planning and rationales behind the new station

The new glass Memorial Hall, known as The Lantern, will shine at the front corner of the police station, and provide a welcoming place for police and fire training, graduation ceremonies, public gatherings, student-focused educational opportunities, and will act as a hub for local volunteerism. 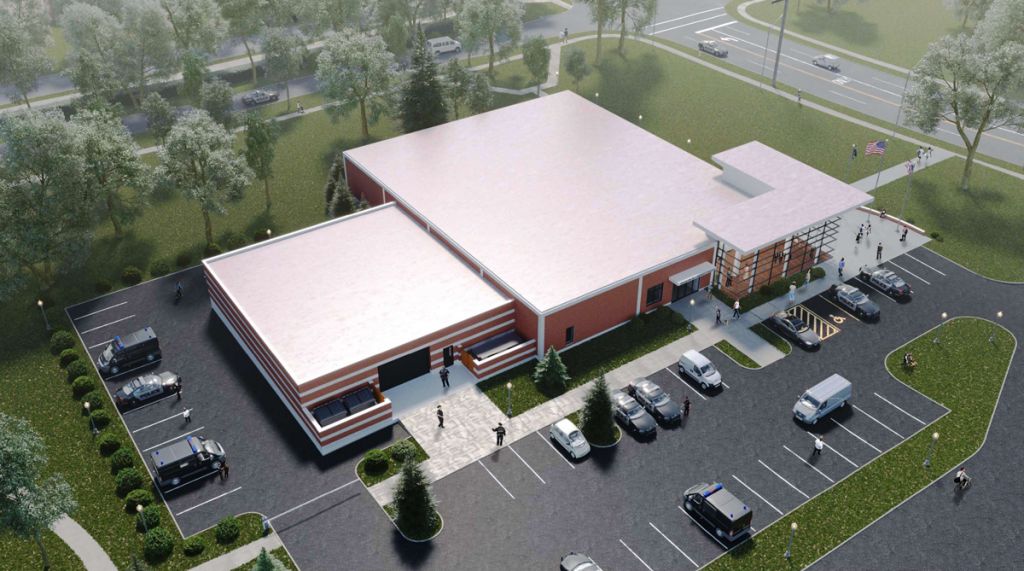 The new police station will have a sally port plus a large garage to house all the police vehicles.